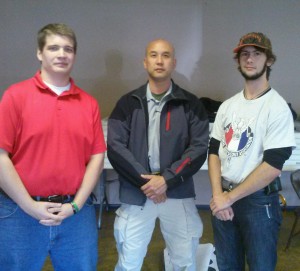 Students for Concealed Carry Foundation held a drawing to give 2 students each a fundamental defensive pistol course this October.
Classes were provided by Indy Pistol Training, one of the first companies to join the Foundation’s network of instructors.
One of the winners, James Maier, sums up his experience and recommendations for this kind of training below.

Through Students for Concealed Carry Foundation, I heard about a drawing for a free defensive pistol course from Indy Pistol Training. I won, and SCCF enrolled me in the class.
The class built from simple safety training, to gun handling, trigger press, and then the half of the class that dealt with live fire- incorporating all we had learned in the beginning lessons into live-fire drills on a hot range.

The first half of the class was largely review, going over things I was familiar with from prior shooting. Additionally, one of the instructors, Bayan Dakuginow, explained why we were doing what we were doing. He incorporated his many experiences as a law enforcement officer as well as his experiences as a paramedic.

The drawing and dry firing exercises proved invaluable, as those of us who hadn’t practiced those aspects of gun handling were able to better transition on the firing line.

For me, the live fire session was extremely eye-opening, as I’d only ever been on linear ranges. I have never received one-on-one training from instructors.

One of the biggest mistakes I made in prior shooting was dropping the gun to see where my rounds were impacting and not finishing my strings of fire prior to checking the target. Bayan had me remediate that. As a result my trigger control improved and I scored tighter groups.

A lesson others can take from the mistakes I made initially is to focus on the front sight. When instructors say everything else should be blurred out, take them seriously; it was when I started blurring the target out and focusing on my sight alignment and trigger control that things started to come together.

While we were told prior to this class to bring a minimum of 250 rounds, I only shot 61. However, I feel like I learned more from those shots than in the hundreds in the life of my handgun.

Training is invaluable, even if you are experienced. It’s good to break down and learn what you’ve been doing incorrectly while shooting by yourself or with friends. Instructors are objective and impartial. They want to teach you concepts and fundamentals that could one day save your life or the lives of your loved ones in an emergency.

As an instructor, Bayan was honest without being insulting, he identified what I was doing wrong and taught me how to fix it. As a result, I saw improvement out of a little more than a single box of .40 ammunition.

I recommend Indy Pistol Training to anyone in Indiana or the Midwest and intend to take future classes from them to become a more well-rounded and responsible shooter, regardless of the firearm or skill set.